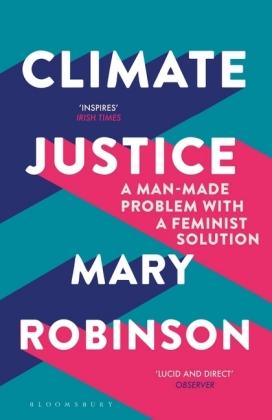 Climate change can no longer be viewed as an isolated problem and has visible repercussions that will reshape our everyday lives, whether we believe in it or not. Last semester, under the Tembusu College Senior Seminar Climate Change, I read the book ‘Climate Justice: A Man-made Problem with a Feminist Solution’. In this book, Robinson (2019) calls attention to climate change, but more specifically, to lives of those on the frontlines of climate change. I deliberate Robinson’s proposed solutions for climate change as well as how feminism intersects with the climate change movement. I will also delve into how Robinson communicates climate change ideas and discuss the best practices of climate change communication.

Robinson attributes climate change to human activities, namely the consumption of fossil fuel and unsustainable land use led on by the industrial revolution. Climate activists may be motivated by a variety of causes, from the preservation of biodiversity to food security but for Robinson, the issue hits particularly close to home. Robinson sees the climate crisis as a threat to her grandson, who will have to live with the consequences of the world’s actions (or lack thereof). This deeply personal and human-centric stake in climate change sets the tone for the entire book. Aided by personal stories and plights of individuals, Robinson humanizes the issue of climate change and lends a voice to those on the city fringes; uncovering the injustice that many have endured due to climate change. Through empathetic writing, Robinson seeks to inspire new perspectives and inclusive solutions for climate change.

Intersectionality is a concept that Robinson invokes in chapter 3 when conferring how oppressive ideologies are often interrelated and continuously influence one another. This concept underpins a key idea that Robinson puts forth in her book: Climate change is an issue that should be of concern not just to environmental advocates, but to all empathetic towards the human condition. Several themes arise in the book, including poverty and feminism. At first glance, they appear to be issues that exist within their separate spheres; issues that require different sets of solutions. However, we are reminded, through several case studies, how these issues are palpably interlinked and even commonly exacerbated due to climate change. In Chapter 3, Robinson tells the story of Sharon Hanshaw and her experience of the disaster caused by Hurricane Katrina. How is it that a storm could cause so much devastation in modern-day America, one of the richest nations in the world? Poverty in New Orleans has drastically amplified the impacts of the storm, making it one of the deadliest hurricanes in the history of the USA.

The issue of wealth inequality and climate change are inextricably intertwined. According to Oxfam (2015), on a global scale, the average emissions of someone in the poorest 10% of the global population is 60 times less than that of someone in the top 10%. To make matters worse, the planet’s poorest half live in places most vulnerable to climate change, such as China and India. Back in New Orleans in August of 2005, a clear divide in losses due to the disaster between the rich and poor is observed. According to a report by the World Bank Group (Hallegatte, et al., 2016), “poor people always lose more than non-poor people from floods and storms.'' Several reasons cited include the poor having less diversified financial portfolios as well as an increased dependence on poorer quality infrastructure that provides little protection during these natural disasters. The report also notes how a perpetual cycle is set up between natural disasters and the creation of poverty. The increased likelihood of natural disasters due to climate change could make it such that the poor have no choice but to settle in these cheaper ‘at risk’ areas, putting themselves in a position of great financial risk. The message is clear: the fight for climate action is also a step to alleviate poverty.

Robinson believes that we need feminists to lead us in navigating these climate change issues. She believes in a novel approach to climate activism — linking women on the frontlines of climate change to those in power for a synergy, which led to the creation of the Troika+ network. I think it is apt for there to be greater female involvement in the climate change movement given that climate change disproportionately affects more women than men. This is the case for women in developing areas, who often have little or no control over the energy they require for day to day life and yet, “are on the receiving end of the effects of increasing environmental degradation and depletion of natural resources, because of their involvement in, and reliance on, livelihoods and activities which depend directly on the natural environment.” (Banda, 2005) A study in disaster mortality also divulged how female survivability rates are reduced more than in men, highlighting a gendered nature of disaster mortality (Neumayer & Plümper, 2007). Post-disaster, women also face the risk of harassment and sexual abuse in resettlement sites (MacDonald, 2005). We must recognize the higher price that women pay for climate change and allow feminists with good understanding of these issues to helm climate change negotiations.

The question I posed in my Week 3 response paper is: How best should we communicate climate change to motivate climate action? I concluded that the communication of scientific information alone is insufficient to create the traction that the movement against climate change very much requires (Kahan et al. 2011). It has been shown that the way people understand scientific knowledge is highly subjective and contingent on various factors. Hence, it is not surprising when individuals have a range of opinions on climate change despite scientific consensus. In this book, Robinson strays away from science and even from environmental issues. She ‘rebrands’ or frames climate change as an issue that is pertinent to all of humanity, placing the focus on the people rather than science. This shifts the climate conversation, potentially allowing the issue to resonate with a larger group, reaching those previously apathetic toward the cause.

According to Chong and Druckman (2007), framing is the process by which people develop an idea of an issue or reorient their thinking about an issue. Frames define how we perceive social events (Gamson & Modigliani, 1987) and further “particular definitions and interpretations of political issues” (Shah et al., 2002) Prime Minister Lee Hsien Loong frames climate change as an issue that pertains to an increasingly belligerent environment — speaking of extreme weather patterns and rising sea levels during his recent National Day Rally (Lee, 2019). He sees the rising sea levels as a threat to Singapore’s national security and describes the plans the government has for the future to mitigate this challenge. This sends a message to Singaporeans that the issue of climate change is one that will be dealt with by the government. He misdirects by downplaying the far-reaching effects of climate change. PM Lee apprises the audience that global temperatures have already risen by 1-degree Celsius compared to pre-industrial times. However, Singapore’s temperature has already risen by 2 degrees Celsius since the 70s. What will the continued rise in temperatures mean for lower-income families who cannot afford air-conditioning? Climate change is also set to adversely impact Singapore’s food security. What would the surge in food prices mean for those who already struggle with the already high costs of living? The climate change narrative PM Lee puts forth justifies the mitigation efforts that the government proposes. However, the true effects of climate change are downplayed to justify climate inaction when it comes to dealing with our local industrial polluters.

There is also caution against the discourse of climate change as a national security issue. For starters, the issue of climate change is never ‘national’. Since environmental degradation is oblivious to our delineated state boundaries; we cannot shut ourselves out by falling into a territorial trap. It should also be of note that the ‘securitizing’ mentality often invokes zero-sum reasoning, which assumes that all other nations are enemies of our state. This could increase tensions between nations that will be detrimental to the global efforts that are required (Deudney, 1990). However, as a nation that values sovereignty and apprehends our vulnerability, perhaps the national security rhetoric is a considered move to garner support for the government’s costly adaptation measures.

In stark contrast, Robinson frames climate change as a social issue, employing emotional appeal to spur understanding and action. However, I worry that the use of pathos would have unintended effects. Such a frame may appear manipulative to some and perhaps even unethical if the audience is not granted logical considerations of the argument to rationally settle on a solution. From an Aristotelian perspective, reframing the issue as Robinson has done is non-ideal, because the issue can always be counter-framed. Furthermore, the very act of framing can always be perceived as manipulation. An Aristotelian approach also recognizes that the line between ethical and unethical communication is not up to climate communicators to denote, but open to the judgement of those on the receiving end of that information. While changing the opinions of climate change sceptics is the end goal, the communication will not succeed if it is not sensitive to the audience’s views and their freedom to decide (Lamb & Lane, 2016). Robinson’s book is indispensable in understanding the need for human-centric climate change solutions, but care must be taken to ensure that the climate change communication acknowledges differing opinions and allows the audience to reach their own conclusions without manipulation.